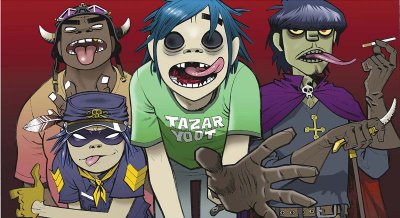 Gorillaz' longtime collaborator, photographer, design and style consultant Jamie Hewlett has been nominated for the Design Museum's annual Designer of the Year award for his work with the band.

Designer of the Year is the annual award for the UK designer or design team whose work made the biggest contribution to design in the past year. Past winners have included Apple’s head of design Jonathan Ive and the pioneering multimedia designer Daniel Brown.

The public can judge the work of the four nominees in an exhibition at the Design Museum from 4 March to 18 June 2006 and can vote for their favourite to win the prize at the exhibition and on the Designer of the Year website at www.designmuseum.org. The outcome of the public vote will count towards the choice of the winner together with the votes of the four jurors: Christopher Bailey, creative director of Burberry; Emily Campbell, head of design at the British Council; Hilary Cottam, the public sector design reformer and last year’s Designer of the Year; and the television presenter Kevin McCloud. The jury is chaired by Alice Rawsthorn, director of the Design Museum. The winner will be announced at a prize giving event at the Design Museum in late May.

Stay tuned to the fans.gorillaz.com for more news on the outcome of this award!