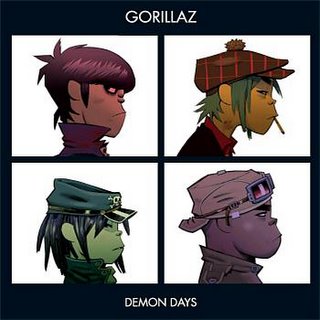 Gorillaz have been nominated for two awards in this years Brit Awards, for Best British Group and Best British Album. The band will take on Coldplay, Hard-Fi, Kaiser Chiefs and Franz Ferdinand in the former category, and will be battling for the prestigious album award against Coldplay, James Blunt, Kate Bush and Kaiser Chiefs.

The February 15 awards will see the band hoping to improve on four years ago, when Gorillaz famously earned six nominations and stole the show with an incredible live performance only to go home empty handed.

Demon Days has also been confirmed as the 5th best selling artist album of 2005.